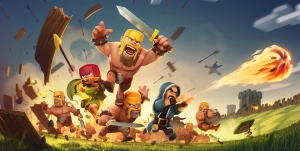 We can learn some mathematics from the popular game, Clash of Clans!

Lets look at the Building Cost and Production Rate of the Gold Mine.

We see that the Build cost actually follows a geometric progression(approximately) as each time, the build cost approximately doubles.

, where a is the first term, and r is the common ratio.

The above formula works well for the first 2 terms, for example the second term is

However, the Production Rate follows an arithmetic progression, as per level, the production rate increases by 200/hr.

, where a is the first term, and d is the common difference. The formula works for all the 5 levels: for instance at level 5 the production rate is

Thanks for reading, and do “like” this post if you enjoy reading it! Hope you learnt some mathematics along the way.