I used to think that with a balanced diet, there is no need to take vitamins. However, recently I read several articles that due to soil depletion, there is lack of minerals in the soil that is used to plant the crops. According to the Bible, the soil is supposed to rest every 7 years for the Sabbath, but I doubt many countries practice this as it will lead to total loss of income for that year.

By the way, Northern China has a type of rice called Dong Bei Rice that is considered one of the best type of rice, certainly superior to Thai rice. I have tasted Dong Bei Rice in Liaoning Province, it is absolutely delicious. The reason it is so good is because due to the harsh winter, the soil there is forced to rest once a year during the winter. Hence, the soil is rich in minerals.

As a result of soil depletion, the plants that you eat may lack certain trace minerals like Magnesium, Molybdenum, Zinc, etc. The animals (cow/pig/lamb) eat plants that lack the minerals, hence the animals themselves lack the mineral too. Basically, the entire food chain, including humans, lack the mineral. Magnesium deficiency is especially serious, even in 1st world countries like America, 57% of the US population lack Magnesium.

Centrum is the number one selling vitamin in the US. And it is very affordable. For its price range, it is probably the best multivitamin. There are two types for Men and Women. (Women need more iron due to the monthly loss of blood; Men need less iron. There are some other differences too, like Men need more Zinc.)

After just one day, I can feel the difference, more energetic and alert. My wife feels it too, and also experienced less hair dropping. Possibly people in Singapore and 1st world countries do not need to eat it everyday, since our diet is relatively nutritious (but still lacking certain minerals due to soil depletion). One can eat it every other day, or up to your own schedule.

Amazon sells it quite cheaply (different packaging from the Singapore version):

For faster delivery in Singapore, one can purchase in Qoo10: 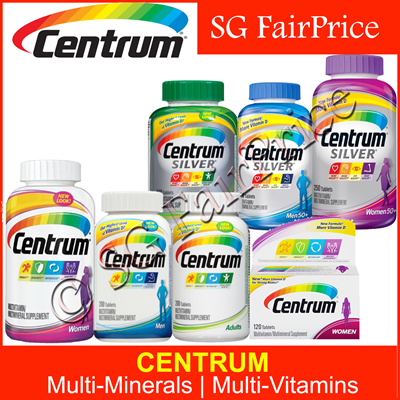