Recently, the hottest topic in Singapore is “BTS concert”. BTS is a Korean band that is extremely popular among the young students in Singapore. The BTS tickets in Singapore are completely sold out in less than 4 hours. (Possibly there are many people “scalping” tickets for resale, also known as “Yellow Cow Tickets” 黄牛票.)

Fans of BTS are known as “The Army”.

According to this website, Korean scientists have “mathematically” proven why Jin, a member of BTS, is the most handsome of all. His nickname is “worldwide handsome”.

Essentially, the idea is using the Golden Ratio, a special number that appears frequently in nature. See also our previous posts:

A plastic surgeon has reported that he studied 269 Asian male faces and concluded that BTS’s Jin is scientifically the most proportional and handsome Asian face. 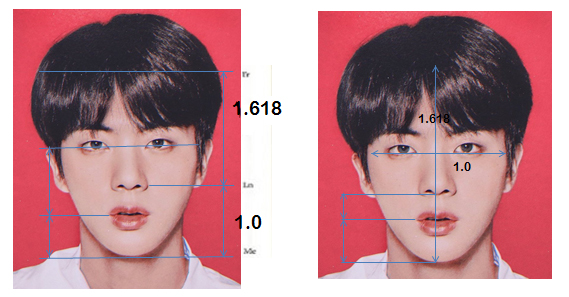 The doctor mentioned 1:1.618 as the “golden ratio” for having a perfectly proportional face. Most often, when applied to facial symmetry, this ratio uses the measures of the width from one ear to the other (1) and for the hairline to the chin (1.618)… And Jin’s face exactly measures up.

Many of BTS videos have hundreds of millions of views. This is one of them: