Washington:  Two Indian-origin students have helped the US win the prestigious International Mathematical
Olympiad after more than two decades.

Shyam Narayanan, 17, and Yang Liu Patil, 18, were part of the six-member US team that won the renowned award after a gap of 21 years. India was ranked 37th in the competition.

In 2005, the Ministry of Education issued a regulation forbidding state-run primary and junior middle schools from offering Olympic math courses. It later cancelled the policy of including Olympic math on school entrance examinations. Likewise in 2010, the ministry cancelled a regulation that the winners of Mathematics Olympiads could be recommended for admission to junior middle schools to remove some of the heavy study burden from students.

The Chengdu government has achieved a huge success since it issued harsh regulations banning Olympic math training in 2009. Local authorities prohibit state-run schoolteachers from working part-time to teach Olympic math and have removed school headmasters who give weight to Olympic math performance in student admissions.

For most primary students in Chengdu, this came as a huge relief.

“I feel like a caged bird been set free.”

“I have more time to do physical exercises and have fun. And I can cultivate my own hobbies.”

The students’ parents were also relieved.

Singapore did relatively well also, with one gold, 4 silver, and 1 bronze, with an overall 10th position. Congratulations Singapore! 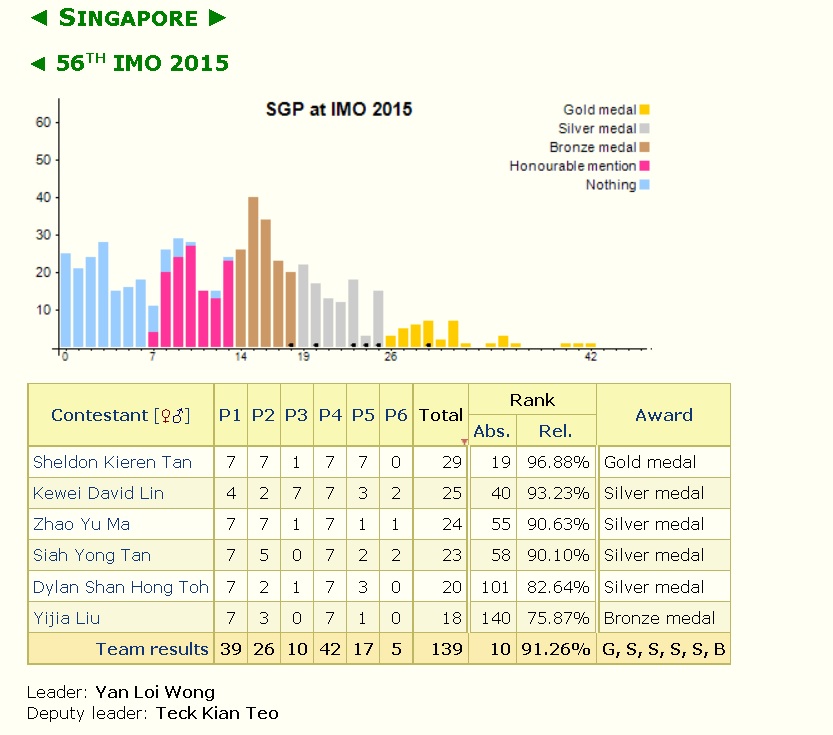 To learn more about Math Olympiad, read my earlier blog post on Recommended Maths Olympiad Books for Self Learning.

Count Down: The Race for Beautiful Solutions at the International Mathematical Olympiad

Each summer, hundreds of seemingly average teens from around the world gather for the International Mathematical Olympiad, a chance to race the clock and one another in the quest for elegant mathematical solutions. In Count Down, the National Book Award finalist Steve Olson sets out to crack the secret of what makes these students such nimble problem solvers. He follows the six U.S. contestants from their free-time games of Ultimate Frisbee to the high-pressure rounds of the competition. In each he finds a potent mix of inspiration, insight, competitiveness, talent, creativity, experience, and, perhaps most important, an enduring sense of wonder. As he observes the Olympians, Olson delves into common questions about math culture and education, exploring why many American students dread geometry, why so few girls pursue competitive math, and whether each of us might have a bit of genius waiting to be nurtured.

3 thoughts on “US First Place in International Math Olympiad! China Drops to Second (Related to Banning of Math Olympiad?)”