The Rubik’s Cube is a famous puzzle, that is related to Math and Group Theory. (See this free introduction by MIT on the The Mathematics of the Rubik’s Cube)

Recently, I am thinking of buying a new Rubik’s Cube, and searched on the internet on what is the best brand of Rubik’s Cube. For Rubik’s Cube, smoothness while turning is really important, because it will simply be easier to turn the edges if the cube is smooth.

After researching online, I came to a very surprising conclusion: The “made in China” brand Dayan Zhanchi is supposedly much better than the official Rubik’s brand (and also other “Western” brands)!

Other than the Dayan series, another alternative is the V-cube series:

However, the reviews on Amazon seem to indicate that the Dayan is superior in both smoothness and price!

If you have any recommendations on which Rubik’s Cube is best, please write in the comments below!

I will be buying the Dayan Cube soon (hopefully in time for Christmas 2014), and will post new updates! I am most probably buying the stickerless version since I have past experience of stickers falling off from my previous cubes. (Note: Stickerless Rubik’s Cubes are banned from competitions for the ridiculous reason that it is possible to “see what colors are behind through the cracks”, see https://github.com/cubing/wca-documents/issues/177) So if your goal is to enter a competition, you may want to consider the sticker version of the Zhanchi.

For parents, buying a Rubik’s cube for your child is a great investment. Playing with the Rubik’s cube is a major intellectual challenge (it has 43 quintillion permutations, only 1 of which is correct), which will develop the child’s brain for logical thinking, which is especially useful for Math and Science. Most importantly, it is fun! 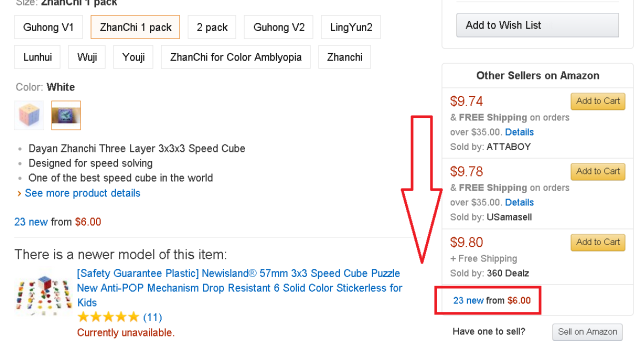