Hi, do feel free to try out our Maths Challenge (Secondary 4 / age 16 difficulty):

If you have solved the problem, please email your solution to mathtuition88@gmail.com .

(Include your name and school if you wish to be listed in the hall of fame below.)

Students who answer correctly (with workings) will be listed in the hall of fame. 🙂

Why Additional Maths (A Maths) is important for entering Medicine:

Quote: While NUS and NTU Medicine does not (officially) require H2 Maths (ie. ‘A’ level Maths), some other (overseas) Medical schools might. And not having H2 Maths might (unofficially) disadvantage your chances, even for NUS and NTU.

Therefore (assuming you intend to fight all the way for your ambition), your safest bet would be to (fight for the opportunity) to take both H2 Bio and H2 Math. The ideal Singapore JC subject combination for applying to Medicine (in any University) is :

Quote: pre-requisites for nus medicine will be H2 Chem and H2 bio or physics.

as for what’s best,
H2 math is almost a must since without it you’ll be ruling out a lot of ‘back-up courses’

The Mobius Strip is a really interesting mathematical surface with just one side. It is easy to make, and cutting it produces many surprising effects! 🙂

The Möbius strip or Möbius band (UK /ˈmɜrbiəs/ or US /ˈmoʊbiəs/; German: [ˈmøːbi̯ʊs]), also Mobius or Moebius, is a surface with only one side and only one boundary component. The Möbius strip has the mathematical property of being non-orientable. It can be realized as a ruled surface. It was discovered independently by the German mathematicians August Ferdinand Möbius and Johann Benedict Listing in 1858.[1][2][3]

A model can easily be created by taking a paper strip and giving it a half-twist, and then joining the ends of the strip together to form a loop. In Euclidean space there are two types of Möbius strips depending on the direction of the half-twist: clockwise and counterclockwise. That is to say, it is a chiral object with “handedness” (right-handed or left-handed).

The Möbius band (equally known as the Möbius strip) is not a surface of only one geometry (i.e., of only one exact size and shape), such as the half-twisted paper strip depicted in the illustration to the right. Rather, mathematicians refer to the (closed) Möbius band as any surface that is homeomorphic to this strip. Its boundary is a simple closed curve, i.e., homeomorphic to a circle. This allows for a very wide variety of geometric versions of the Möbius band as surfaces each having a definite size and shape. For example, any closed rectangle with length L and width W can be glued to itself (by identifying one edge with the opposite edge after a reversal of orientation) to make a Möbius band. Some of these can be smoothly modeled in 3-dimensional space, and others cannot (see section Fattest rectangular Möbius strip in 3-space below). Yet another example is the complete open Möbius band (see section Open Möbius band below). Topologically, this is slightly different from the more usual — closed — Möbius band, in that any open Möbius band has no boundary.

It is straightforward to find algebraic equations the solutions of which have the topology of a Möbius strip, but in general these equations do not describe the same geometric shape that one gets from the twisted paper model described above. In particular, the twisted paper model is a developable surface (it has zero Gaussian curvature). A system of differential-algebraic equations that describes models of this type was published in 2007 together with its numerical solution.[4]

The Euler characteristic of the Möbius strip is zero.

Source: Taken from Research by Stanford, Education: EDUC115N How to Learn Math

This word cloud was generated on August 9th based on 850 responses to the prompt “Please submit a word that, in your opinion, describes the most important aspect of a student’s ideal relationship with mathematics.”

For the null hypothesis not to be rejected,

is out of the set

, the null hypothesis would be rejected. There is sufficient evidence that the squirrels on the island do not have the same mean tail length as the species known to her.

(technique: put in words what

Let B=result of test is positive

Note that the probability is surprisingly quite low! (This is called the False positive paradox, a statistical result where false positive tests are more probable than true positive tests, occurring when the overall population has a low incidence of a condition and the incidence rate is lower than the false positive rate. See http://en.wikipedia.org/wiki/False_positive_paradox)

These offer two-year courses leading to the GCE A-level examination.

The only centralised institute is Millennia Institute (MI), which offers a three-year course leading to the GCE A-level examination in arts, science, and commerce.[3]

The manual for CASIO FX-9860G Slim is can be found here:

The information about Tables and how to generate a table is on page 121.

Generating tables is useful to solve some questions in sequences and series, and also probability. It makes guess and check questions much faster to solve.

Then the remaining five women’s total number of arrangements are: 5!

(3! to permute each family)

By drawing a diagram, the two women have 4 slots to choose from, where order matters:

We first find the required number of ways by treating the seats as unnumbered:

Since the seats are numbered, there are 10 choices for the point of reference, thus no. of ways =

One of my students asked me how to solve 2007 Paper 1 Q8 (iii) using Foot of Perpendicular method.

The answer given in the TYS uses a sine method, which is actually shorter in this case, since we have found the angle in part (ii).

Nevertheless, here is how we solve the question using Foot of Perpendicular method.

(Due to copyright issues, I cannot post the whole question here, so please refer to your Ten Year Series.)

Firstly, let F be the foot of the perpendicular. 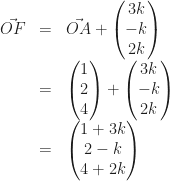 Substituting back into Eqn (1),

If you or a friend are looking for Maths tuition: O level, A level H2 JC (Junior College) Maths Tuition, IB, IP, Olympiad, GEP and any other form of mathematics you can think of.

So if you are in need of the solution to your mathematical woes, drop me a message!