This is a basic but very useful corollary of the usual Lebesgue’s Dominated Convergence Theorem.

From what I see, it is basically the Sequential Criterion plus the usual Dominated Convergence Theorem.

The Arzela-Ascoli Theorem is a rather formidable-sounding theorem that gives a necessary and sufficient condition for a sequence of real-valued continuous functions on a closed and bounded interval to have a uniformly convergent subsequence.

. Then there exists a subsequence

The converse of the Arzela-Ascoli Theorem is also true, in the sense that if every subsequence of

has a uniformly convergent subsequence, then

is uniformly bounded and equicontinuous.

is uniformly bounded if there is a number

. The sequence is equicontinous if, for all

in the sequence. The key point here is that a single

) works for the entire family of functions.

be a continuous function and let

be a sequence of functions such that

Prove that there exists a continuous function

The idea is to use Arzela-Ascoli Theorem. Hence, we need to show that

is uniformly bounded and equicontinuous. 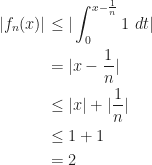 This shows that the sequence is uniformly bounded. 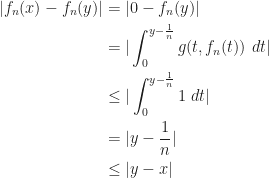 Therefore we may choose

. Thus the sequence is indeed equicontinuous.

By Arzela-Ascoli Theorem, there exists a subsequence

that is uniformly convergent.

By the Uniform Limit Theorem,

is continuous since each

. Show that the set

. This is popularly known as the graph of a function. Without loss of generality, we may assume that

is nonnegative. This is because we can write

, where we split the function into two nonnegative parts.

The proof here can also be found in Wheedon’s Analysis book, Chapter 5.

The strategy for proving this question is to approximate the graph of the function with arbitrarily thin rectangular strips. Let

is measurable (and has measure zero).

into countable union of sets

each with finite measure. By the same analysis, each

is measurable (and has measure zero). Thus

is a countable union of measurable sets and thus is measurable (has measure zero).